Moving to Morocco has provided me with an incredible opportunity to approach photography from a new angle.  I have travelled throughout China, Hong Kong, India and Central America lugging multiple flavors of medium format gear and film, though I have never had a chance to set up shop and get comfortable with my surroundings.  In the past it has always been a rush from city to city with very little time to react to challenges and new vantage points – if I was interested in creating an image, time was of the essence as I may not see that place or view again.

I recently went on a scouting trip – recon, if you will – to Chellah, a Roman necropolis located on the outskirts of Rabat.  From Wikipedia:

The Phoenicians and the Carthaginians, who founded several colonies in Morocco, probably inhabited the banks of the Bou Regreg. Chellah is the site of the ruins of the Roman town known as Sala Colonia, referred to as Sala by Ptolemy. Excavations show an important port city with ruined Roman architectural elements including a decumanus maximus or principal Roman way, a forum and a triumphal arch….The site was abandoned in 1154 in favour of nearby Salé. The Almohad dynasty used the ghost town as a necropolis. In the mid-14th century, a Merinid sultan, Abu l-Hasan, built monuments and the main gate, dated to 1339. These later Merinid additions included a mosque, a zawiya, and royal tombs, including that of Abu l-Hasan.[3]

I ran around Chellah photographing the ruins for the better part of an hour prior to the tour buses rolling in.  Notice the lack of extremely sun burnt European tourists in the following photographs.  Aside from the extremely friendly staff and police officers assigned to patrol the ruins, I felt like I was completely alone.

The grounds are huge and range from ruins of Roman roads to destroyed columns and tombs. 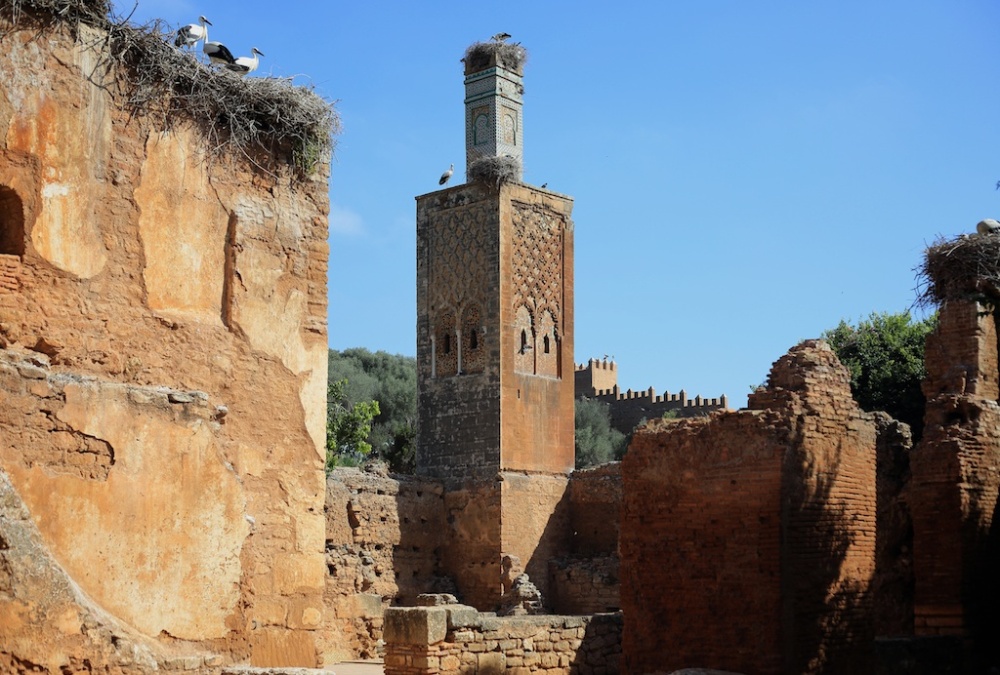 One of the big attractions that all of the guide books publicize is the “eel pit” (sweeeeet) that offered great luck and fertility to those that tossed eggs to the eels.  Unfortunately, the eel pit looks like it has seen better days and apparently did not contain any eels.  My loss.  There were, however, cats everywhere.

Maybe the cats ate the eels?

The following photograph is my favorite.  Any translators in the audience?

After the quick visit to Chellah I am looking forward to returning during better light and possibly with my film camera.  The light at this time of the morning – well after dawn – is rough.  Exposing for the details in the shade leaves the sky a ghastly white.  Exposing for the sky and clouds is just as rough on the landscape.  I am pleased with some of these grab shots, though am looking forward to a return visit at dawn or dusk or on an overcast day.

A note to potential visitors – admission to the ruins is cheap.  A bottle of water inside of the gate may cost three times as much as entry.  Also, if you arrive early you may have the ruins all to yourself until the tour buses start to roll in.  I am not sure if they allow tripods.  More on that later.

As always, all of the above photographs are protected by copyright.  And pitbulls.